"Our job is to respond to the needs of our citizens during the scariest times of their lives. They trust us to show up when no one else can, and we don’t want to let them down." - Lieutenant Cliff Woitena

The Role of SWAT

In an effort to address a dramatic increase in the frequency of critical incident situations, the League City Police Department relies on a dedicated cadre of trained personnel comprising League City SWAT. 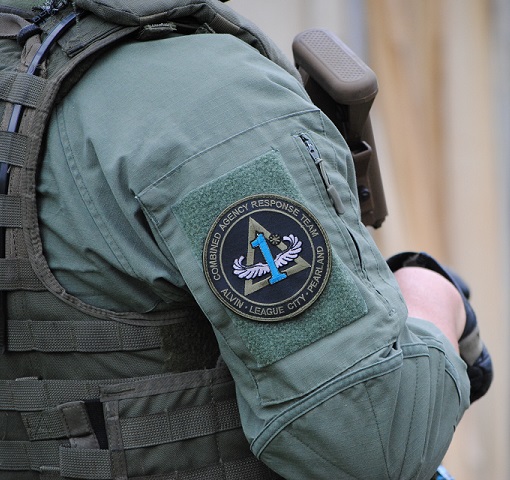 The League City SWAT Team is a contributing member to the Combined Agency Response Team (CART). Members fill roles of command, tactical, marksman, and negotiations and respond to events such as:

CART is comprised of League City, Pearland, and Alvin personnel and assists many surrounding jurisdictions and federal agencies. All team members perform these duties in addition to their normal job assignments. Members are required to maintain standards of training and testable skills as dictated by their assignment.

The team was created in 1991 as a special missions team combined with three other agencies: Alvin, Pearland, and Friendswood. At its inception, it was deemed a “containment” team. A containment team responds to keep a high risk scene from expanding and going mobile. This meant valuable time was spent awaiting an outside agency's arrival to take care of the high-risk situation, putting victims at the mercy of a commute. By the early 2000s, the CART team transitioned from a containment team to a true SWAT Team because our Department wanted to be able to respond appropriately and in a timely manner to the needs of our citizens. The team is comprised of negotiators and tactical members that deploy in crisis situations to restore order during chaos in a safe and effective manner.

Currently, the League City Police Department partners with the Alvin and Pearland Police Departments. Combining the agencies allows for the operation costs to be offset, eliminating cities bearing the burden of costs alone. High-risk calls in League City can be responded to rapidly by highly skilled officers that have experience training together and are familiar with the area. A multi-agency team allows us to train multiple members for specialized positions: negotiators, breachers, police marksmen, entrymen, and chemical munitions specialists.

Over the years, the team has responded to numerous high risk situations including warrants, active shooters, civil disturbances, suicidal and barricaded subjects. The team has successfully performed hostage and citizen rescues in all three cities. In 2010, the team responded to a Chase bank hostage situation which was one of only two in the United States that year. Thirteen hostages were safely released. Texas Association of Hostage Negotiators (THAN) selected the CART Negotiators Team as the 2011 Negotiation Team of the Year. In February 2014, CART members successfully apprehended an aggravated robbery suspect who had barricaded himself inside his home and provided assistance to the Capitol Police for the protection of U.S. Senator John Cornyn and Texas Attorney General Greg Abbott. Many of the team members have become subject matter experts, instructing other law enforcement agencies throughout the country.

In the fall of 2013, the Department acquired an armored vehicle called a Mine Resistant Ambush Protected (MRAP) vehicle on permanent loan with no cost to the city and no obligation to the federal government. The vehicle was detailed with proper city identification using funds obtained from local narcotics seizures. Prior to acquiring the MRAP, the Department utilized an armored vehicle that was no longer mechanically or electrically sound. In addition, the vehicle lacked ballistic integrity, leaving team members with only body armor to protect themselves and victims exposed.

The addition of the MRAP ultimately saved taxpayers hundreds of thousands of dollars on a replacement vehicle. The MRAP can frequently be seen at community events, allowing our citizens to ask questions about it's use and functionality.

The addition of the MRAP allows the team to provide essential mobile protection to victims and officers on high-risk scenes. With more active-shooter incidents occurring in the United States, the League City Police Department SWAT team can respond appropriately with the man-power, training, and vital equipment necessary to resolve a crisis.