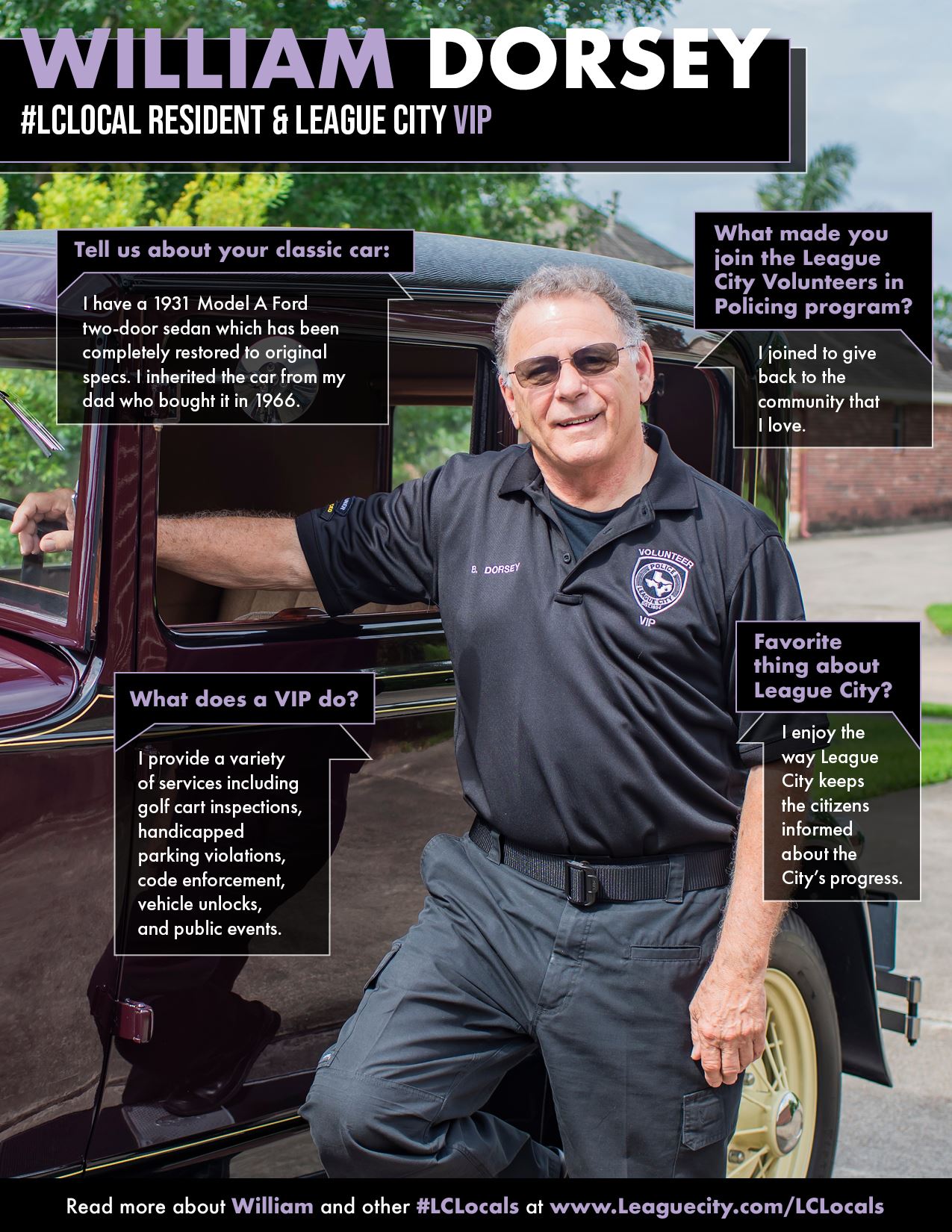 Tell us about yourself and your background:

I was born in Ohio and moved to Texas 43 years ago. I retired three years ago from Shell Oil after 39 years of service.

Where are you from and how long have you lived in League City?

I was born in Cleveland, Ohio and moved to Bay Village on Lake Erie. I came down here temporarily for work and I met my wife at the San Jacinto monument. When I met her, she was in nursing school and I applied at Shell, got hired, and moved to La Porte. About 10 years ago, I was about to retire and my wife and I wanted a bigger house (I wanted a big garage) and we came down to League City and found the house that we liked. We love it here and love what the City does for its residents.

You are involved with the LCPD as a Volunteer In Policing (VIP). What made you join?

I have been a VIP for three years. My son-in-law is a sergeant at the LCPD and he sent me an application so I could join. First, you graduate from the Citizen Police Academy and then you can join the VIP organization. The VIPs are volunteers in policing. We have three cars of our own and we provide a variety of services including; golf cart inspection, handicapped parking violations, code enforcement, vehicle unlocks, and public events, etc. I joined to give back to the community that we love.

It makes me feel like I’m providing an important service to the police department and citizens. I think it allows for more productive use of the officers’ time and is a worthwhile program.

Tell us about your family life and hobbies:

I have been married for 40 years and my wife is a retired nurse. I have twin daughters who are 35 years old. I’m a member of the “Greater Houston Model A Ford Club” and am a previous member of the “Space City Cruisers ” in League City. The  Greater Houston Model A Ford Club was started years ago in Houston and I’m currently on the board of directors.

You have a love for classic cars. How did that come about?

I have a 1931 Model A Ford two-door sedan which has been completely restored to original specs. I inherited the car from my dad who bought it in 1966 when I was a teenager. I remember him driving it up the driveway and the firsts words out of my mouth were, “Wow Dad let’s make this a hot rod!”

My dad said "No, son. This all stays original." So when I got the car, I had it restored to original status and it took four years to complete.

Has your Model A won any awards?

I’ve won the Mayor’s Award in Friendswood and in Pearland for best car. I’ve also won first place in my division at the Autorama in Houston.

Fun fact about yourself:

I used to bare ski and skydive.

Mr. Sombero for Mexican food and Red River for BBQ.

I like how informative the city is about the community and the City’s progress. I loved the League City University class I attended and I like the City events provided.